↓ Skip to Main Content
Home › RFID: The Past, Present, and Future

RFID: The Past, Present, and Future 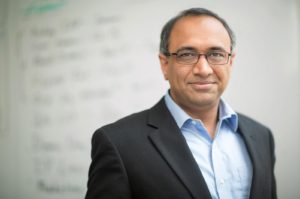 Prof. Sanjay E. Sarma is the Fred Fort Flowers and Daniel Fort Flowers professor of mechanical engineering and the Vice President for Open Learning at Massachusetts Institute of Technology. He is credited with developing many standards and technologies in the commercial RFID industry. Prof. Sarma is co-author of The Inversion Factor: How to Thrive in the IOT Economy (MIT Press, 2017), along with Linda Bernardi and the late Kenneth Traub; the book charts the evolution of three IoTs—the Internet of Things (devices connected to the Internet), the Intelligence of Things (devices that host software applications), and the Innovation of Things (devices that become experiences). Prof. Sarma also serves on the board of the MOOC provider edX as a representative of MIT.

Prof. Sarma co-founded the Auto-ID center at MIT together with Prof. Sunny Siu and Dr. David Brock of MIT, and Kevin Ashton of P&G to make the vision of standards based RFID a commercial reality. The center opened in 1999 as an industry sponsored, MIT research project with the express goal of creating a global open standard system to put RFID everywhere. Once the EPC System was developed, MIT licensed it to non-profit standards body GS1 to create EPCglobal. The center was renamed Auto-ID Labs and continue their research. The Auto ID Labs helped standardize RFID technologies and laid the groundwork for the Internet of Things (IoT).

Prof. Sarma is founder of the company IoTask, which provides consulting and advisory services on establishing and standardizing internet of things systems across a number of industry sectors. Prof. Sarma is a frequent industry speaker and serves on the Board of Governors of EPCglobal and GS1 US, and as a permanent guest of GS1. He serves on the board of Hochschild Mining, as well as technical advisor and board member to Top Flight Technologies. From 2012 to 2014 he served as the Chairman of the Board of EPCglobal. He also served as CTO and Director (Board Member) of OATSystems, a leader in the RFID market. OATSystems was acquired in 2008 by Checkpoint Systems.

Prof. Sarma is a recipient of the National Science Foundation CAREER Award, the Cecil and Ida Green Career Development Chair at MIT, the Den Hartog Award for Excellence in Teaching, the Keenan Award for Innovations in Undergraduate Education, the MacVicar Fellowship and the New England Business and Technology Award. He was named as Business Week’s ‘e.biz 25 Innovators’ list and Information Week’s “Innovators and Influencers”. In 2010 he received the inaugural RFID Journal Special Achievement Award. He has over 50 publications in computational geometry, virtual reality, manufacturing, CAD, RFID, security and embedded computing.